Contrary to what outsiders may think, for most wine writers and sommeliers, it’s a rare thing to be able to taste wines that are older than we are, and it’s always an exciting occasion. So, when Jean-François Bourdy with importer Richard Dudley Craig presented a range of Côtes du Jura and Château-Chalon vintages back to 1937 to taste in a small room of a mews house in Notting Hill, London, there was a hushed silence and sense of incredulity among some.

This tasting last month was a first for the UK, and a first for Europe, beyond France I believe. Caves Jean Bourdy already has quite a reputation in North America since offering a line-up of 40 old vintages to a mix of trade and consumers organised by the importer Garagiste. And, a huge tasting of 120 wines from this producer’s stock of old vintages also was staged in Besançon, France in 2006, organized by sommelier Christophe Menozzi, and attended among other professionals and grands amateurs (amateur wine connoisseurs) by sommelier Olivier Poels for the Revue de Vin de France and by fine wine collector and fan of the Jura, François Audouze.

Caves Jean Bourdy, in the pretty village of Arlay just north of Lons-le-Saunier, is today run by the 14th generation of the Bourdy family, Jean-François, in charge of sales, and his brother Jean-Philippe, in charge of the winemaking and the vineyards. As well as their extraordinary collection of old vintages, built up on a systematic basis since the end of the 19th century, the Bourdys continue to make wine today from 10 hectares including 0.5 hectares in Château-Chalon. In my relatively limited tasting experience of their wines, I have noted a distinct improvement in the past few years, and wonder very much if this has to do with their work in the vineyards which have been managed biodynamically since 2006 (certified 2010).

How to taste a range of Jura wines
The London tasting included a range of Bourdy’s current releases and then a selection of old vintages with four reds, four whites and six Château-Chalons, most of them re-labelled and many re-corked. We started the tasting with an excellent Crémant du Jura (pure Chardonnay) and finished with a Vin de Paille and Macvin. I decided to follow the Jura way of tasting in-between these extremes, which is based on the logic that Jura reds are light with low tannin levels, and therefore it’s logical to start with these, and then follow with non-oxidative whites, finishing with the oxidative whites. Here is an overview of what we tasted.

The Reds – 2007 back to 1953
Caves Bourdy Côtes du Jura reds are always a blend of the three Jura varieties, Poulsard, Trousseau and Pinot Noir with roughly equal amounts. The wines are aged for at least three years in old oak tonneaux – mainly 50-60 year old 600-800l demi-muids casks that need to be topped up usually only once during the first year. The current vintage is 2007, a vintage that I tasted first last year soon after bottling and enjoyed its mineral and fruit characteristics then; in the cold light of a London morning, it tasted very dry, but the smokey red fruit nose lifted it and it showed an acidity built to age and work well with charcuterie.

The four old reds were 1997, 1983, 1967 and 1953. I enjoyed the rusticity of the very delicate 1997; the 1983 was too volatile; the 1967 was my definite favourite with a mature red fruit and fungal nose, and still great length and fruit on the palate. Jean-François told me it was a very difficult vintage, and was very hard when young, but it has aged beautifully. The 1953 still showed some red colour behind the browning and had a slightly sweetish character, which I found odd. Tasting a leftover of a second bottle opened for the tasting on the following day over lunch I enjoyed it more, but it is still an oddity. But, how many other light reds can last 60 years and more?

The Whites – 2007 back to 1937
Bourdy’s Côte du Jura whites are pure Chardonnay, when nothing is noted on the label – somewhat confusing to many and there is no back label (Why? Well, it’s the traditional Jura way, I guess, not something I really endorse). Again these wines are aged in old tonneaux as the red is, for at least three years. This was the first time I had tasted the current 2007 release and I enjoyed it more than the 2006 I had tasted a year ago. It showed good spicy yellow fruit with typical fresh acidity on the palate backed up by spicy apricots and good intensity and length. 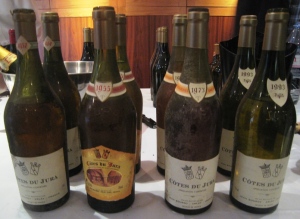 The four old whites were 1993, 1973, 1955 and 1937. With the exception of the 1973, which I found strangely out of balance (Jean-François said it was simply in a phase that showed extremely high  acidity and volatile esters on the nose, and that it would come around), I adored the other three whites. The 1993 showed minerality on the nose with still ripe, intense fruit on the palate; the mid-amber 1955 had very good fruit/acid balance; and the orangey-amber 1937 was extraordinary, not nutty as one might expect, but almost jammy and creamy, with fabulous length. I think it may have been even better than the 1947 white I had the chance to share with Christophe Menozzi last year.

Vins Jaune and Château-Chalon: 2004 back to 1937
All Bourdy’s Savagnin grapes whether grown in Arlay or Château-Chalon start off life destined to be a Vin Jaune, but along the way some barrels have to be withdrawn as they won’t last the 6-year course, and these are released early as Côtes du Jura Savagnin (and labelled as such), a wine not, Jean-François said, destined for long ageing in bottle. The current 2007 release was tasting well with distinct lemony acidity and spicy minerals on the nose.  The current release Côtes du Jura Vin Jaune 2004 was a pale golden-yellow with light spiced curried notes on the nose, even some peat character, with an elegant, light and fine balanced palate. The Château-Chalon 2004 was even paler and very different on the nose, much more mineral and tasting tangy as well as stony on the palate. The Bourdys are very keen to make their Vins Jaunes in a light, elegant style without high alcohol levels, and both these wines were marked 13% though the Château-Chalon seemed a touch higher.

The opportunity to taste six old vintages of Bourdy’s Château-Chalon was a real treat, and seeing the progression of vintages, fascinating. The wines shown were: 1996 – so developed compared to 2004, the mineral, curry and cream had kicked in on the nose, and the palate was tremendous, still a baby too; 1976 – perhaps at a mid-stage, not young, not mature and still showing very high acidity; 1969 – darkening in colour and showing a fascinating orangey nose together with minerals and gorgeous balance between rounded, creamy fruit and high acidity on the palate; 1954 – seemed younger, lighter and elegant with a lovely fruit character and finish; 1945 – the only one where the balance wasn’t quite right for me; finally 1937 – at 75 years old showing a nose of crystallized fruit and minerals following through on the delicious palate, a complete revelation.

Some repeats at lunch the following day
I was happy to join Richard and Jean-François for lunch at Medlar Restaurant the next day, a very tasty lunch too in relaxed atmosphere with impeccable service. This fairly new restaurant down at the western end of King’s Road has just won a Michelin star. As mentioned above, we re-tasted a bottle of 1953 red, which had been opened the previous afternoon, but better than that was the chance to drink a glass of the Château-Chalon 1969 that had been open 20 hours by this time – it tasted even better than on the previous day.

For reports of earlier tastings mentioned above, see Joshua Greene’s report in Wines & Spirits on the Garagiste tasting, and if you read French, then delve into François Audouze’s tasting notes of the 2006 tasting of 120 Bourdy wines – the reds, the whites and the Vins Jaunes and Château-Chalons (in which Audouze recommends caviar with the 1969 Château-Chalon!).

My thanks to Jean-François Bourdy and to Richard Dudley Craig of Dudley Craig Wines, who has small stocks of all these old vintages in the UK, as well as the current releases.