Last weekend’s Percée du Vin Jaune took place in Voiteur in mixed weather, but with 35-40,000 people attending, everyone was pleased the festival went off well in the usual great atmosphere. The only down side was that the star bottle of the auction, the 1864 Château-Chalon did not receive its reserve price of 10,000€.

For me this delightful event was in particular an opportunity to taste a range of wines put on for the press group, most notably Vins Jaunes from 2004, 2005 and the most recently launched vintage 2006. In brief the 2005s really shone with their fabulous acidity to balance wonderful intensity and flavours, sthe fact that they have now had up to a year in bottle. However, I’m learning that the differences in vintage characteristics in Vins Jaune are not nearly as marked as for the other wines of the region. Despite a difficult vintage overall, the 2006 Vins Jaunes that have been released (many don’t release the latest vintage till much later in the year) are showing well, with plenty of typicity.

Snowfall photo opportunity!
So, I’ve stayed on for a week to visit various producers of all types and sizes some who I’ve visited before but not for a while, and others new to me. I’m also meeting key people in the region to discuss various aspects of the Jura wine region and its history, all of which I need for the Jura book-to-come, the first ever in English. Work has started in earnest. 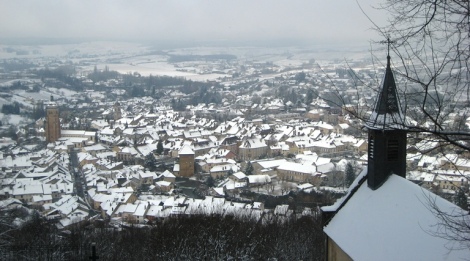 Meantime, snow has descended on and off during the week, with an unexpectedly large fall in the wine region last night. Contrary to popular belief, the altitude of the vineyards in the Jura is not much higher than those in Burgundy or Alsace, rarely above 350 meters so having around 8cm of snow in the vineyards is unusual. In Arbois I had a break between visits at a time when the snow had slowed down and the cloud lifted, though the sun didn’t really make an appearance, so I headed in my 4WD car up to a remote viewpoint called the Belvédère de la Chapelle de l’Hermitage. 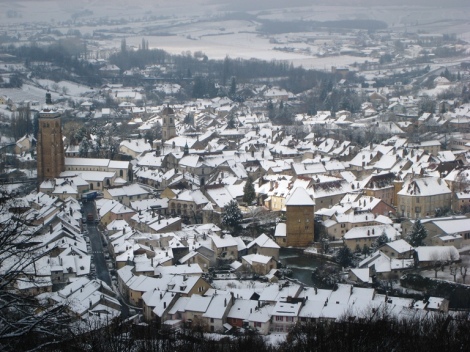 The town of Arbois from the Hermitage Chapel belvedere ©Wink Lorch

After lunch I had an appointment with a relatively new and promising producer, André-Jean Morin, who previously delivered his grapes to the Fruitière Vinicole d’Arbois, the local cooperative. His Domaine de la Touraize wines are worth looking out for – I shall write more later.

But, before we tasted and settled down to getting to know each other, I asked him to show me his vineyards, especially if they had a good view. “The best view in Arbois,” AJ (pronounced Ah-Gee) boasted taking me to some vineyards just above the cemetery. He also pointed out what he believes to be the oldest vines in Arbois – Chardonnay from 1914. These do not belong to him but he does have Chardonnay vines planted in the next plot from the 1950s – his father and grand-father were vignerons.

As I need to prepare for another day of visits, I will leave you with this image snapped in the middle of the town of Arbois.