Pelican Progress: Jura Wine news though the screen and from the ground

The Jura wine world has certainly not stood still in any way since I last wrote on this blog. New vignerons have emerged, almost all of them choosing to work organically; wineries have changed hands; newer producers have evolved and there have been mixed vintage fortunes, as so often.

Forgive me that this blog site is so out-of-date and hard to read on portable devices. I will consider how to change this with minimal time and impact, or transfer everything to my main Wine Travel Media site. If anyone wishes to help me on this, contact me privately. Meantime, please read on…

At the end of March I was due to attend Le Nez dans le Vert, Jura’s massive organic wine tasting show, to catch up, but that was cancelled. My absence here, many of you will already be aware, has all to do with dealing with personal loss (my partner Brett Jones sadly died in April 2018) and hard work towards personal achievement, with the writing and publication last July of my second book, Wines of the French Alps. 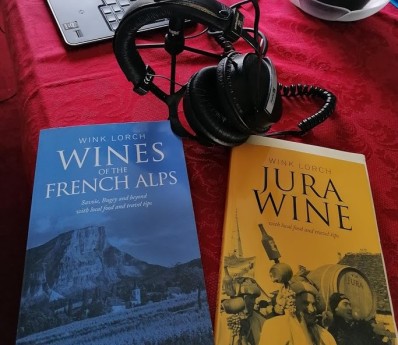 A chance to learn about the Jura wine region, not just from my book, but through interviews and webinars I’ve done recently. © Kevin Ecock

The publication of my new book and the glowing reviews also gave a welcome boost to sales of the Jura Wine book meaning I needed to do a fourth printing. Just before the covid-19 crisis struck, I received delivery, allowing me to continuing fulfilling orders from my website for despatch around the world.

I have done some other work during lockdown too (while based fortunately at my French mountain base), in particular making the ePub versions (for iPad, iPhone and many other readers) of both books available to buy from my own website. Now you can buy digital versions direct, with a special discounted price for buying both together, and this helps me, as it does if you purchase the print books direct from me.

Many of you may be aware that the prestigious London wine club 67 Pall Mall, with wine director Ronan Sayburn MS, has been conducting an incredible series of online masterclasses all of which have been recorded. Wine samples have been available to go along with these webinars for delivery in the UK and Europe. I was proud to be asked to conduct a few.

The recording of the #67fromhome masterclass I did in April provides a good overview of the Jura Wine region for those in need of revision – don’t worry if you don’t have the six wines to hand, it stands alone as an educational webinar with or without the wines.

I was also interviewed by Kevin Ecock of Wine Ireland for his podcast and reveal how I came to first explore the Jura and eventually write the book. And, I enjoyed an hour-long Instagram video chat with US wine blogger Keith Edwards along the same theme.

My excitement is mounting for my next masterclass for 67 Pall Mall, which will be in interview form with the Burgundian owners of the biodynamic estate Domaine du Pélican, founded in 2012. You have just a few more days to buy the wine samples and taste along, but in any case do watch along live so that you can ask questions next Friday 3 July,the session will also be available as a video recording later.

The pelican is the symbol of the goregous little Jura town of Arbois. Below is the first paragraph of my Domaine du Pélican profile in my book, published in 2014. The estate was founded by Guillaume, Marquis d’Angerville of the biodynamically-run Volnay estate, together with his long-term estate manager, François Duvivier

With the creation in 2012 of the most significant new estate in Arbois for some years, it seems apt that its name and label feature a pelican. It is said that a pelican was brought to Arbois by Maximilian of Hapsburg in the 15th century as it was a favourite creature of his wife, Marie de Bourgogne. Unfortunately the bird died, but as a recognized Christian symbol of the time the town of Arbois took it on as its town crest. The image shows the pelican nourishing its young from its heart. It seems amazing that no wine estate had ever used the pelican name and that it has taken an outsider – it was the domaine’s co-owner François Duvivier’s idea – to rectify this.

Domaine du Pélican began with the 2012 vintage from just 5ha of biodynamic vineyards, which they had taken over from Château de Chavanes in Montigny-les-Arsures. The domaine also acquired another amazing site in Arbois, Grand Curoulet, which had been farmed (or rather hardly farmed at all) by natural wine producer Jean-Marc Brignot and before that by Robert Aviet, a well-known Arbois vigneron who had retired before I started visiting the area. Unfortunately, it all had to be replanted. Later, in December 2014, Pélican took over most of Jacques Puffeney’s vineyards on his retirement. In the masterclass we will talk more about these vineyard sites and working biodynamically in the Jura.

Vintage 2018 was an amazingly good one for Domaine du Pélican and the rest of the region. There was huge relief that there was a good quantity of healthy grapes across all the varieties – in fact they were worried the yields were almost too high. But results are superb, and Pélican decided to take the opportunity to extend its small range to single include parcel/terroir wines and this has added a new dimension to the range.

If you are subscriber to Jancis Robinson’s website (and if not, you can take out an inexpensive trial subscription), you will find detailed tasting notes from Julia Harding  MW of the whole of Pélican’s 2018 range when the wines were released in London (sadly I was not at the tasting). It is at the bottom of a report on Jura, Savoie and Bugey wines presented in London in March by the importer Vine Trail (more in a future post).

The existing cellars of Domaine du Pélican are becoming a little cramped. A new one is on the way. ©Wink Lorch

On a very brief visit to Pélican during my first wine sortie out of lockdown a couple of weeks ago, I met with François Duvivier, and was able to tour the building site of the domaine’s new winery being constructed on the site of the Le Clos vineyard parcel. It will be ready to receive the 2020 wines in barrel, but not vinify them. For now, they still use the Château de Chavanes original winery, where I had a quick taste of the 2019 wines from barrels. The quality looks excellent, but sadly Pélican, as others in the Jura, suffered greatly from a combination of some frost damage and in particular summer drought conditions, which reduced quantity dramatically.

While I was in Arbois, I had the chance to go to two restaurants – the first restaurant visits since lockdown (please don’t get too jealous). François Duvivier kindly took me to the vignerons’ favourite lunch place – Bistrot des Claquets and it was a Wednesday. The bistrot only ever has one fixed choice meal, changing each day, and in a new initiative it is fully vegetarian on Wednesdays – the lunch was as filling and tasty as ever. The restaurant and bar, which was up for sale, has an assured future now as it has just been taken over by Rachel Gariglio, who is a familiar face, as she has been working there for eight years. Afficionados will be pleased to hear that apart from vegetarian Wednesdays, little is likely to change, and Rachel is a big fan of the local organic and natural wines.

I’ve known this sulphur-free Ploussard from Domane de la Tournelle since the 2003 vintage. It hits the spot.

In the evening, with a friend, we went just across the road to Le Bistronome, which was taken over in March 2019, by Lisa and Jérôme, formerly in the kitchen of the famous two-star Michelin restaurant in Arbois, Maison Jeunet. I had heard several good reports and was excited to try it, especially as I know the restaurant building, which is always enjoyable to eat in, overlooking the cute Cuisance river.

This was the first week that the Bistronome had re-opened since France allowed restaurants to open again, and there was strict adherence to the rules of wearing masks on entering, with sanitizer available and a choice of receiving the proper menus or using a QR code to access them on the website. We had the incredibly reasonably-priced and quite delicious and well-presented three-course menu of the day – the à la carte menu looked enticing too.

As for Le Bistronome’s wine list, it offers a mouth-watering, wide selection of all Jura wine styles. What to choose was such a dilemma as we needed a wine to go with everything and I was spoilt for choice. I plumped for the Ploussard I’ve loved for so many years, but hadn’t tried for ages: l’uva from Domaine de la Tournelle 2018, vinified just 100 meters away from the restaurant, hit the spot so perfectly, I was falling back in love with the Jura all over again.

Please do join the Domaine du Pélican masterclass next week. And look out for at least one more blog post here in the next couple of weeks featuring an amazing and original map. I will also share news on two newer Jura organic vignerons, Bruno Bienaimé and (the longer-established) Philippe Châtillon, not featured in my book, plus a revisit to a couple of important domaines, in the Arbois area, with recent changes in management.

2 thoughts on “Pelican Progress: Jura Wine news though the screen and from the ground”